I’m still hand writing first drafts. It’s working out well. I like the organic, Zen-like flow of words from pen to paper. I’m not sure what that means actually but it sounds good.

For thousands of years the only way people could write was by hand. Pen, stylus or pointy rock to paper, animal-hide or cave wall. It’s the mind moving the hand to form words. Only in the past, 100 years or so, have people had regular access to keyboards to compose thought.

When I replied back to Neal on my last post it got me thinking more about my own progression to writing on a computer. I did not get a computer until my last year in college, which was the late 80s. Even then, I still handwrote the first drafts of my papers 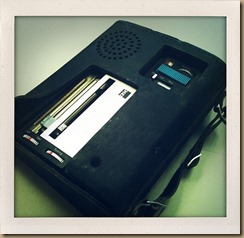 and then typed them in, editing as I went. After that when I started working full time it was several years before I had a computer at my desk and even used a computer all day.

In the first law firm I worked at only secretaries and word processors had computers at their desk. Also one of the paralegals who doubled as the firm’s IT guy. The rest of us had to dictate our work like the attorneys. I used to index documents and summarize depositions by speaking into a Dictaphone. It was strange and intimidating for me especially when I had to hand the finished tape to surely a word processor to be transcribed.

I didn’t get a computer at my desk until 1995 when I started working at a different firm. During that point of the interview when the managing attorney said, “Do you have any questions?” I asked if the paralegals were allowed to have computers at their desk and I’m pretty sure that’s what got me the job. Thus my business writing directly to a computer began.

I still did personal writing by hand. It wasn’t until 2002 did I ever consider keeping my journal on a computer or typing first drafts directly. What changed in 2002? Why this is when I met Jerry and he got me my first laptop!

I didn’t even think about it at first. I just started typing. I liked the tap-tapping noise my typing made on the keyboard; it sounded like words. At lunch I used to sit in my car with that laptop and work on short stories just because I could.

Eventually the newness of it all wore off and distractions crept in. The big one? The Internet! And therein lies my reason to continue to hand writing first drafts. No internet! Sitting at my desk with just a pen and a piece of paper and no Facebook to update or Twitter feeds to check or blogs to read keeps my thoughts focused and hand moving.

No distractions…except Jerry telling me, “Hey, as long as you’re up why don’t we get into work early?” Because the computer is not turned on, so I can’t be doing anything important, right?