Last month a significant figure from my life passed away. His name was Jim Willis. Jim was an English teacher at Granada High School in Livermore California, and for a short stint, 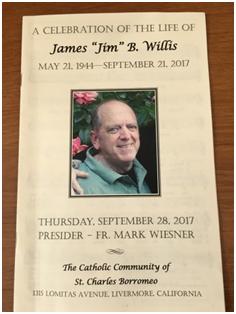 1981 to 1985, he and his wife Claudia were youth ministers at St. Charles Catholic Church. I was one of Jim’s many students at Granada and was also one of the lucky few that benefitted from his spiritual teachings at St. Charles Youth Ministry.

As my English teacher Jim fostered my love of the written word and as my youth minister Jim paved my spiritual path. He was so good at these things that I left the Church many years ago. Even now I can see him rolling his eyes at my bad joke but using the writing and critical thinking skills he taught me, maybe I can explain why I believe this is a good thing.

My reasons for leaving the Catholic Church were many but not overly dramatic. The bottom line is that I never really understood why believing in Christ, the Resurrection and the Eucharist made me a better person. I spent the next several years exploring other aspects of spirituality. I stopped traditional Christian prayer and adopted a meditation practice. I learned the importance of gratitude and staying mindful. I started to see that these were the things that Jesus was all about and the traditional Christian way of presenting them simply didn’t work for me. I got to this place thanks to the very freedom of thought promoted by Jim 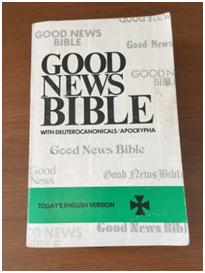 The Jim’s Celebration Liturgy was my first time back in a Catholic church in years. Over the years I had attended the occasional Catholic wedding or funeral but never fully participated. This time, because it was for Jim, I made a conscious decision to embrace every aspect of the service. I listened to every word said by Father Mark. One of the things he said was that Jim Willis had one more thing to teach us all that day. In my case, Jim Willis helped me let go.

Sitting in the church I grew up in, surrounded by old friends and so many familiar faces from the past, the lingering guilt I carried around for years, that I no longer believed in the traditional Christian doctrine, seemed to vanish once and for all. I felt so at home sitting in St. Charles yet at the same time I was happy I had left and if I never return I would be fine with that too. I stayed present for the entire mass and for the first time ever in my life, gave it my full attention. I recited the prayers meaningfully, I sang joyfully and I received communion sincerely. Only by leaving the church and finding my own brand of spirituality would I be able to return to mass and have such an experience.

Does this mean I will be returning to Church? God no! I don’t need to go back. I felt like I had the experience that God intended for that moment. It’s something I will always remember and the impact will stay with me.

As I left I thanked Father Mark. Usually the priest is untouchable after mass, surrounded by people who want to talk to him. But for this brief moment he was not. He looked right at me as I walked past so I took his hand and told him I grew up in the church and hadn’t been back for years. He said, “Welcome home.” I smiled, feeling like the prodigal son and as they say at the end of every Catholic mass, I walked out in peace in love to serve the Lord…in my own way.

2 thoughts on “One More Lesson From Jim Willis”